It started with a three-legged cat....

In Fall 1985, I inherited a gray and white three-legged cat named Tigger and a black and white polydactyl cat named Elliott from people who found Tigger and adopted Elliott and later moved away, and were unable to take the cats with them. Elliott loved to sit on my shoulders. 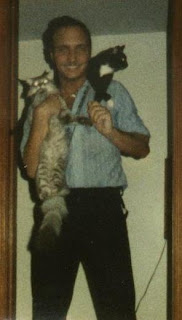 Tigger was forever your friend if you would scratch that one part of his head where he couldn't reach. His stump and phantom limb would swing furiously for as long as you were willing to scratch him.
On the morning of October 16, 1985, the cats pushed open the back door that often failed to latch properly and left the building. Elliott returned, but Tigger climbed a tree in the backyard and stayed up there for several hours before I became concerned about him, and did what most people would probably do -- called the Fire Department.
The dispatcher at the fire department laughed and told me that they didn't get cats out of trees anymore, and suggested that I call the humane society. The humane society advised me to call a tree service and I called  the first one in the local Yellow Pages and they said they'd be happy to get my cat out of the tree -- for $45. I hung up on them and called the Tallahassee Democrat newspaper and told them my three-legged cat had been stuck up in a tree for most of the day and no one was helping me. The people at the newspaper said they would send out a reporter within an hour.
I called the next tree service in the phone book and told them about my discussion with the other tree service and that newspaper reporters would be at my house to cover the story. I asked if they would consider waiving any fee to remove my three-legged cat from a tree? They agreed to free Tigger for free, and the next day, it was the most important news in town, front page center of the newspaper across the fold. 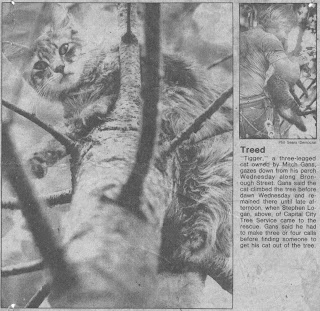 "Tiggers are wonderful things...."
I unexpectedly learned that Elliott would ride a bicycle with me on a short ride to a friend's house with him tucked inside my jacket. After a block, Elliott squirmed out and onto my shoulders and a legend was born. I had participated for several years in the Springtime Tallahassee parade as a mime, first with Godby High School's Drama Club and later by myself, so I was inspired to begin riding with Elliott in the next two Springtime Tallahassee parades and in the 1987 Veterans' Day parade. 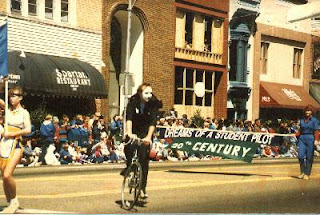 Veterans' Day was Elliott's last parade. Shortly after Christmas, a roommate accidentally let him out and Elliott was hit by a car and died.
I was heartbroken. It was only three months until Springtime Tallahassee and I had lost a friend. I asked around for a kitten and in January, Peter brought me a gray and white male with a brown Jupiter spot on his chest. I named him David, after my paternal grandfather who died 13 years before I was born, and my middle name, which later shortened to Dave, or as more publicly known, Dave the Cat.
The first thing I did was place Dave on my shoulders, with his head facing the way Elliott's did, and every time I touched him, I put him on my shoulders the same way. After about a week, Dave surprised me by jumping onto my shoulders -- right after I exited the shower. Amidst all the pain, I praised Dave, promising myself to gently discourage future such events unless I had a shirt on.
Within a month, I took my first ride with Dave and thereafter accompanied him on longer and longer bike rides. I optimistically submitted my application for the Springtime Tallahassee parade with a $25 non-refundable admission fee and for the first time was summarily denied. I had an idea as to why -- Elliott and I had become a very popular parade act. Unlike the rest of the parade participants, we did not just proceed through the parade in 20 minutes and exit, we rode back and forth throughout the parade route for more than an hour, because we enjoyed it so much and the crowds were always so appreciative. With all the work I had done in recent weeks, I considered this to be a minor setback.
I had friends who worked at Gumby's Pizza on West Tennessee Street and approached Mike the owner and asked him if I pulled a giant Gumby through the Springtime Tallahassee parade, would he pay me $25? I was loath to lose my $25. Mike said yes.
I happened to own a 6-foot inflatable Gumby at the time, and a red Radio Flyer wagon, just large enough to have sturdy rubber-coated metal wheels, and had a really good friend named Jamie (and still do), with whom I entrusted my bicycle and asked him to bring a camera. I carried in my pocket the $25 canceled check for my rejected parade entry, a letter from Mike authorizing me to represent Gumby's Pizza in the Springtime Tallahassee parade, and for luck, a Monopoly Chance card that read GET OUT OF JAIL FREE.
On Saturday morning of the Springtime Tallahassee parade on March 26, 1988, Jamie and I rode in his gray Volkswagon bug with my bicycle and little red wagon, Gumby, Dave the Cat, a roll of tape and an American flag, and went to the parade.
The Springtime Tallahassee parade always begins at 10:30 am at the intersection of East 1st Avenue and North Monroe Street and proceeds 1.01 miles south on Monroe Street to the Gaines Street intersection. Thomasville Road intersects Monroe Street at an angle a matter of yards north of East 1st Avenue on the east side of Monroe Street. Jamie and I parked as close to Thomasville Road and Monroe Street as we could.
I inflated Gumby and taped him into the red wagon and taped the American flag to Gumby's outstretched left hand. I gave Jamie my bike, with explicit instructions to walk along the parade route with it and keep stride with me, and if all went well, his only duty was to take photos. Otherwise, he was to rush out into the street with my bike and take charge of Gumby while Dave and I were to presumably ride to safety.
A few days before, I had notified my parents of my plans with full understanding that I was assuming some risk, and not only to my new friend Dave the Cat. Mom was very unhappy and Dad tried to calm her while stoically asking me, "Is there nothing I can say to talk you out of this?" No, there was not.
US Senator Bob Graham, D-FL, served as governor of Florida from 1979 until 1987, and often led Springtime Tallahassee parades, and was expected to do the same at this one. As Bob walked down 1st Avenue to lead the parade, Dave the Cat and I towed Patriotic Gumby by the wagon handle down Thomasville Road towards Monroe Street to meet him. As we both merged at the front of the parade, I waved and said, "Hi Bob!"
"Hi Mitch!" was the Senator's cheerful reply. We had met a few times before and Bob Graham's ability to recall names and details about acquaintances and constituents is often lauded by people who know him well.
200,000 people regularly come to see the Springtime Tallahassee parade, and it was the most exhilarating walk of my life. Halfway through Dave's first parade, I stopped the parade and motioned for Jamie to come out into the street and said, "Hold on, Bob. It's picture time!" Bob and I shook hands and posed for the picture that resides in my wallet and in my hallway at home to this day. I enlarged our photo and autographed it and sent it to Senator Bob Graham and received a warm thank-you letter in return. 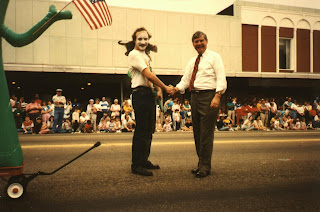 It was one of the most memorable days of my life. I will always be grateful to Tigger and Elliott's original owners, and to Peter and Jamie, and to the countless thousands of people who appreciated Dave the Cat and me throughout Dave's long life.
"Be always sure you're right, then go ahead." -- Davy Crockett

Mitch
I have lived in Tallahassee Florida since 1978, graduated from Amos P. Godby High School and twice from Florida State University. I rode a bicycle with my cat Dave for many years in Florida and Alabama parades, and am a Halloween costumist, softball coach, husband, father and great-grandfather.